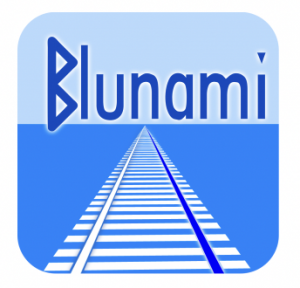 We are taking pre orders for Blunami Decoders.  We expect them to ship after the NMRA Convention

BlueRail has partnered with SoundTraxx on a new product called Blunami. What is this new product?

SoundTraxx has been making DCC decoders for 30+ years, and has amassed a huge library of locomotive sounds and train behavior code that makes them an industry leader in DCC decoders for model trains. The sounds, lighting fx, and behaviors can be found in their award winning and very popular Tsunami2 decoder. This product has more than 300 customizable feature controls which are typically managed with CV variables using a cab controller or via JMRI.

The new Blunami operates exactly as a Tsunami2, but has been additionally equipped with a bluetooth chip that allows for direct bi-directional control using the Blunami app on any iOS smart device.

The Blunami app provides a direct interface to all of Blunami’s 300+ features, which may be easily customized with sliders and pulldown menus (or by editing CVs). SoundTraxx fans will be pleased that they may never have to consult a CV manual again or deal with JMRI driver installation issues (or even a program track) to adjust their decoder settings.

The Blunami works like any Tsunami2 in that it can be controlled by a standard DCC system (for both train control and programming).

As a bonus, Blunami does not require a DCC system, and may be operated on standard DC track or powered by battery and controlled via the app.

Blunami is designed with a few target audiences in mind: experienced DCC users who would like full direct access to CV customization (without using a programming track or JMRI), casual hobbyists who want full train control without having to learn DCC (or own DCC equipment), as well as users interested in battery power.

The bluetooth used in Blunami should not be confused with limited range classic bluetooth, and allows for control of as many Blunami locos as you may care to use, with great range, and without fear of interference from other users. Blunami’s superior range and connection strength may be attributed to careful BT module and antenna implementation and associated firmware, and should not be confused with shorter range products developed by other manufacturers that you may be aware of.

Blunami BLU-2200
The BLU-2200 is a universal-style sound decoder that can be operated in three different ways: DC, DCC and Wireless mode. Using the Blunami app (iOS versions 8 or later), you can operate your locomotive with incredible ease of use. This decoder is suitable for use in both HO and small S-scale models. Wireless mode not currently available for android devices.

DYNAMIC DIGITAL EXHAUST
For added realism, you’ll love our reactive Dynamic Digital Exhaust (DDE) feature that automatically notches your models engine up or down depending on the load on the motor. With the Blunami App, DDE calibration has never been easier. When your locomotive is traveling across flat terrain and simply maintaining speed, you will hear your locomotive chugging along. But, when the locomotive encounters a grade and the engineer applies more throttle to get the train up the hill, the engine sounds will automatically react and reflect the increase of power needed to crest the hill. DDE accomplishes this by calculating the changes in strain or load on the motor and adjusting the exhaust to appropriately simulate the work the engineer would be doing to the throttle of the engine. This gives Blunami the ability to create the most realistic experience possible.

This 2-amp, universal-style format, and includes a connector to easily add a CurrentKeeper (P.N. 810140 or 810160) to maintain performance over dirty track and switches.